The launch was great fun and all the contributors present received chopsticks and metal straws and copies of the book and the talented Foo May Lyn treated the audience to an absolutely extraordinary reading/performance of one of the stories.

There are many more stories from a very diverse group of writers and makes for a very entertaining and edifying read.

Like my own contributions, not all the featured pieces are Malaysian-centric, though over all the slant leans heavily in that direction.

If you enjoy food (and if you don't, what is wrong with you?) and are curious about Malaysia and food writing in general this is the book for you.

Many thanks to Bettina Chua Abdullah, John Brunton, and all the team at Hikayat for choosing my pieces and making this book possible.

You can buy it here:
https://gerakbudayapenang.com/shop/recommended/telltale-food-writings-from-the-fay-khoo-award-2017-2019/ 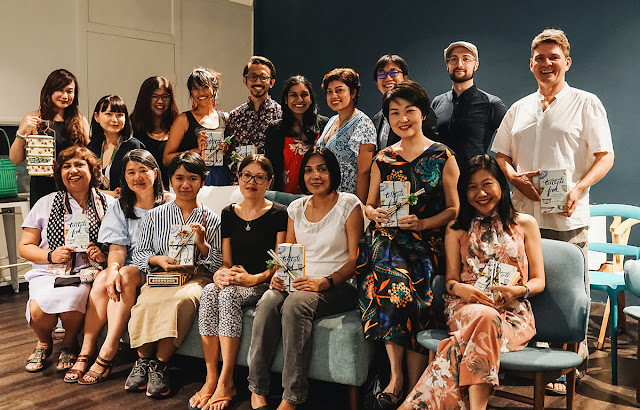 Telltale Food features an astonishing variety of writings that are a delicious revelation: sensory, nourishing narratives exploring themes of hunger, discovery, growth, delight and sorrow, wrapped in the world of food, cooking and eating. In their mostly Asian-inspired stories, the writers of the Fay Khoo Award transport us from the kitchens they have inherited to the ones they have adopted, down buzzy streets and in swish restaurants.

There is the taste of joyful celebration and the bite of heartbreak. There is food for comfort, and food for friends, and food for the gods. And there is humour and adventure and coming of age. Through the twin lenses of memory and reflection, this is food writing for the senses and the soul.

“This wonderful anthology will open up a new world of storytelling, both for those who love reading and those who aspire to write themselves.” John Brunton, senior journalist at the Guardian and chief judge of the Fay Khoo Award.
(from Gerakbudaya bookshop's website)