The Poetry of Bob Dylan 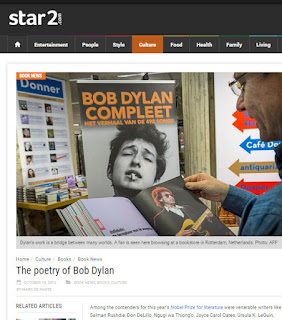 Here's a piece I wrote for The Star about Bob Dylan winning the Nobel Prize for Literature. Initially I had 2000 words of personal anecdotes like discovering Dylan's albums on my hands and knees while leafing through my uncle's LP collection, or how I struggled with Dylan's finger-picking patterns, or how I was stranded for 4 month in the mountain hut in the French Pyrenees where I worked and Dylan's early albums were some of the only CDs we had. I cooked and washed up to Maggie's Farm and Tangled Up In Blue, but finally none of these anecdotes made the final cut and this article is much more about Dylan and his lyrics rather than the impact his music has had on my life.