Book Review - Everything About Us 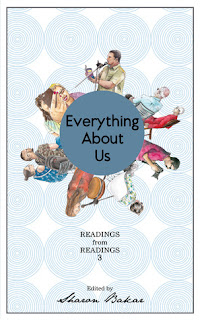 Disclaimer: I am one of the contributors to this anthology and its editor Sharon Bakar also edited Tropical Madness, a collection of my short stories. I also personally know at least half the contributors, so this review will focus mainly on those I don’t know personally.

Everything About Us is the third volume in the Readings from Readings series of anthologies of short stories and poems. There are some very strong pieces in this collection and the over all standard is very high. For readers familiar with contemporary Malaysian writing there will be many familiar names, but there are also new writers featured, some having their work published for the first time.

There are too many pieces to comment on each individually, but a few of my personal favourites include, in no particular order:

David T.K. Wong’s Escape from Singapore, a touching non-fiction account of how the author fled with members of his family aboard a cramped boat that brought him to Australia, and a timely reminder that we shouldn’t take peace for granted. This piece is an excerpt from his 2015 memoir Adrift: My Childhood in Colonial Singapore, a book I will definitely be putting on my must-read list.

Crosswords by Cynthia Reed is a moving account of a man dealing with the fact that his wife is losing her memories while simultaneously struggling with the vagaries of his own mind.

Aaron Chelliah’s story Dear Zed is a powerful piece that deals with the troubling but very real subject of Malaysia’s persecution of homosexuals. It is a brave piece and solidly written. Extraordinarily, this is the writer’s first published piece. Hopefully we will have the chance to read more from this writer in the future.

I was lucky enough to hear Sreedhevi Iyer read her story IC a few years ago at the monthly Readings session that is at the origins of this book. It takes a long hard look at Malaysia’s obsession with pigeon-holing everyone, and while not unhumorous there is a certain undercurrent of controlled but fiery anger that gives this piece an edge.

In his scathing poem What is KL? Simon Beaumont tells us that KL (Kuala Lumpur) is a ‘kidney stone trapped in that small Malayan cock dangling off the Asian subcontinent’. There are a lot of home truths in this poem about a city its inhabitants love to hate and hate to love, but ultimately can’t help themselves ‘Because KL is a teenager’s bedroom of a city … still learning how to be a city. And even though KL is messy, it all kind of works.’

Editor Sharon Bakar’s story Just Like Steven Spielberg is one of the few stories that deliberately pays homage to the unique idiomatic and idiosyncratic features of Malaysian English, something that I feel Malaysian writers should be more adventurous with in general. The story also highlights the patriarchal arrogance and blatant misogyny that is all too rife in Malaysia.

Ng Min Shen’s story Yesterday highlights the topics of depression and suicide, difficult subjects to write about, but she manages to sensitively pull off a coherent narrative even if the inevitability of the ending was a little predictable. I was astonished to learn that this is her first published story – definitely a writer to keep an eye on.

If I had to pick a favourite story in this collection it would be Lights by Cheah Pih Nyuk. It blends environmental concerns with magic realism and in a collection that boast some fine writing this is one of the best-written pieces, and also possibly the longest. This is a writer to watch and one I would definitely like to read more of.

There are plenty of other noteworthy stories here from writers such as Vernon Daim, Dina Zaman, and Ted Mahsun, poetry from Nin Harris, Sivani Sivagurunatham, and Bernice Chauly, and a few pieces that straddle poetry and short story forms including two chilling pieces by Dipika Mukherjee, and last and most certainly not least the uniquely strange teamwork of writer Zedeck Siew and illustrator Sharon Chin which is in a category all of its own.

All in all this is a very solid collection and encouraging in that it shows that there are many young (and not so young) writers in Malaysia prepared to speak out and up and capable of doing so with wit and style and insight.

If you’re looking for a primer on contemporary Malaysian writing this collection is a very good place to start.