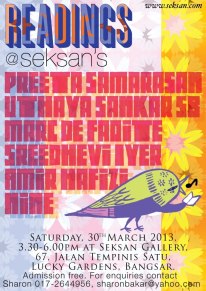 I am very flattered that Sharon Bakar has not only invited me to read at this month's Readings session in Bangsar, on Saturday 30th of March, but also to compere the event.

Readings is the longest running literary event in Malaysian history and is held at Seksan's gallery in Bangsar.

Readings is a free event and all are welcome to attend.
I will be introducing some well known, and less well known writers from the Malaysian writing scene.

Preeta Samarasan is the author of Evening Is The Whole Day, of which The Guardian said: "Samarasan's inventive prose is stunning", while The New York Times declared "Her ambitious spiraling plot, her richly embroidered prose, her sense of place, and her psychological acuity are stunning."

I'm halfway through reading it myself and enjoying it immensely. A skillfully written book indeed.
Uthaya Sankar has published his latest compilation of short stories, Kisah dari Siru Kambam (Stories from Siru Kambam). He also regularly contributes to The Malaysian Insider and Free Malaysia Today.


The pejuang sastera Melayu are trying their best to stop people from reading this book as they are worried Uthaya is spreading Hinduism through his fiction.

Sreedhevi Iyer splits her time between Australia and Malaysia. Her work has appeared in dotlit, M/c reviews, and Syntax in Brisbane, and in The New Straits Times and Selangor Times in Kuala Lumpur. She also wrote a column for The Sunday Star in Malaysia, called Regards, Sree. She is currently working on her debut novel set in Burma in the 1930s and Malaysia in the 1990s.

Nine is from Northern Ireland via Scotland and has been living out of a rucksack for the past three years. She is the former LGBT editor of The Skinny magazine, and writes the zines If Destroyed Still True and Sex Industry Apologist. Her writing has been published in numerous anthologies, magazines and websites. Her themes of choice include sex work, queer issues, travel, bereavement, and awkward teenage experiences.


According to his blog - The Malay Male - Amir Hafizi is the sexiest man on Earth. His chest is as thick as any redwood trunk; from which hangs two great boughs of heavily muscled arms and one minor but strong branch of solid wood somewhere down there.

Amir is one of the three contributors to KL Noir (also available for purchase here)who will be reading on Saturday, the other two being Preeta Samarasan and myself. 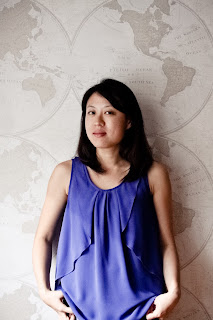 I will be presenting the October 2021 episode of Readings - Malaysia's longest running monthly literary event. The readers are: Wan Phing Lim, Kopi Soh, Elizabeth Smith Alexander, Tash Aw, and Sarah Sharum. Wan Phing Lim was born in Butterworth, Penang and lives in Kuala Lumpur. Her short stories have appeared in literary magazines and anthologies in UK, USA, Canada, Japan, Singapore and Malaysia. ‘Two Figures in a Car’ is her first short story collection and is published by Penguin SEA. Kopi Soh is the pseudonym of a US based Malaysian Author and Illustrator. Her first book, Oh, I Thought I Was The Only One, published in 2012, is a self-help book aimed at creating awareness of common psychological issues. In 2013, she published her second book, Oh... I Thought I Was the Only One 2, which focuses on how children experience various stresses in their daily lives, and teaching them skills to overcome them. Her latest book Looking After the Ashes is published by Penguin SEA, which als
Read more